The Garden Music Series at Marie Selby Botanical Gardens is proud to present an eclectic variety of local and international musical artists who perform music of nearly every style and musical genre, both vocal and instrumental. From classical pianists, folk, country, latin and world music, jazz and standards, pop, soul and rock and roll, there is something for everyone. Artists often interpret covers of well known songs in addition to performing original material with repertoire that spans the styles and sounds of current hits to the early 20th century. Garden Music Series guests enjoy a world-class outdoor concert experience along with beautiful views and relaxing walks through the Gardens. Grilled foods will be available for purchase from the Michael’s on East grill including a cash bar of beer, wine, Bloody Mary’s and Mimosas. B’s Cool Treat’s will have their cart on-site with a wide assortment of frozen treats.

TROLLEY will be available from 11:00 am to 5:00pm from the Sarasota Friendship Center (1888 Brother Geenen Way). 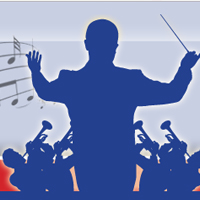 The band will play action movie music from films like Star Wars, Indiana Jones and Pirates of the Caribbean from composers like John Williams and others in addition to music from movies with great love Stories like Gone with the Wind and Dr Zhivago.  More current box office movie hits like The Greatest Showman have powerful and meaningful music written into their scores.

The concert will feature a very fine vocal soloist from the Sun Coast area.  Mary Beth McLeod is known for her exceptional jazz and pop singing style.  Ms. McLeod will grace the audience with an arraignment written specifically for her and the SCB of Over the Rainbow, from the Wizard of Oz, as well as music from other movies.  The concert will have something for everyone and is sure to bring back memories of classic cinema with great music.