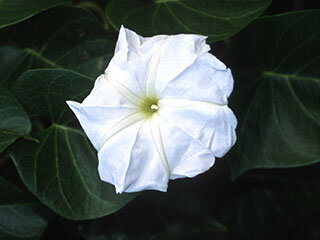 Moonvine is an aggressive twining vine with large white flowers that open in the early evening and close in the morning. The flowers are intensely fragrant, and attract large hawk moths which serve to pollinate the plant. The seeds are then dispersed by water and left to float in the current, which can carry them thousands of miles to their possible new homes. “Sea bean” collectors on the coasts of Britain regularly find the seeds; some are still viable and can be germinated after their long trip from Florida’s Cape Canaveral. Any wound to the plant stem results in a copious flow of white sap. This sap was used by pre-Columbian Americans to coagulate the latex from the rubber tree and make rubber. The Aztecs used rubber for currency, among other things.

Not too long ago, Florida’s giant Lake Okeechobee would fill with rainwater and flood its southern banks every year during the wet season. The water’s slow journey through the Everglades’ 100-mile long “river of grass” and out to Florida Bay and the Gulf of Mexico would take months. At the very beginning of this journey would have been a floodplain covered in a massive pond apple forest, completely blanketed in moonvine. Pond apple is a native tree which grows in regularly flooded areas, and is a preferred host for the moonvine. It has also become a rare sight in the state outside of the Everglades due to development, mostly agriculture. The massive forest of moonvine and pond apples covering 32,000 acres along the southern edge of Lake Okeechobee was destroyed in less than a decade, largely due to the sugar industry.

The best places to see moonvine in Florida are on the water. It’s a relatively common sight along Sarasota’s coastal waters so take a stroll along Selby’s Mangrove Boardwalk and you’ll find it growing among the mangrove and buttonwood trees, to protect its papery leaves from the unrelenting coastal winds.  Freshwater mangrove swamps in the southern interior of the state are also likely spots to sight the flowers, but keep in mind that during the day, you’re likely to see nothing but a blanket of foliage. Stick around until right around sunset if you want to see the flowers open, or plan an early morning hike.