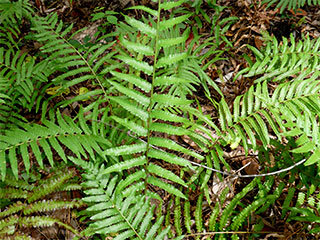 Although this feature is supposed to showcase plants in bloom, not all plants do, in fact, bloom. The farther a plant’s biology goes back in time, the less complicated its reproductive cycle tends to be…in a manner of speaking. Ferns pre-date flowering plants in our planet’s evolution, and produce spores. Many people assume that the spore acts like a seed in a flowering plant; growing into an adult plant with its parents’ characteristics. Ferns have what’s known as “alternating generations,” which means that depending on which generation the genetic individual falls into, it lives its life as a “sporophyte,” which is the typical “fern” we’re all used to seeing, or as a “gametophyte,” which is the sexual generation, and which looks like algae.

It works like this: a mature, sporophyte will produce “fertile fronds,” which are leaves that produce sori (clusters of spores) on their underside. As they dry, the spores are released into the air and can travel great distances – spores by their nature are much heartier than seeds. When the spore has landed in an appropriate environment, it will germinate. The resulting genetic individual is a gametophyte, and possesses sexual organs which produce both sperm and egg. Like in animals, the sperm becomes mobile and seeks an egg to fertilize. Once the sperm and egg from the gametophytes are introduced, a zygote is formed. This zygote is the infant stage of the sporophyte generation, and usually stays attached to the gametophyte for a period, drawing sustenance from it. Then this plant grows into an adult, the “fern” we all know and love, and produces spores, starting the process over again. In many ways this route of reproduction is simpler than colorful, scented flowers and their intricate pollinator relationships, but in some ways it is so foreign to us that it seems more complicated.

There are over one hundred ferns native to Florida, and they grow everywhere. We have ferns which are dependent on fire, ferns which need high levels of moisture but can take full sun, and epiphytic ferns which grow high in oak and cabbage palms. There are wetland species, scrub species, and species so adaptable they can take a range of conditions. One such species is Thelypteris kunthii. Although difficult to find commercially, this is one of the best ferns for the home landscape in Florida. Beautiful yet manageable, southern shield fern performs in a variety of conditions, from moist to dry soil, from shaded areas of the garden to full sun. Many people are surprised to learn that ferns grow in full sun, but many species do. The more light the plants get, the more water they need, so if planted in full sun, supplemental irrigation is highly recommended. They make good borders and look great as a mass planting, especially underneath an oak tree.

In our Florida Native Garden at the northern end of the Gardens, we have many species of native Florida ferns on display, including Thelypteris kunthii. In the sporophyte stage, of course.