One of Selby Gardens’ strangest passion flower vines is beginning to bloom this year, and it has the oddest scientific name of all, Passiflora xiikzodz. The species name is pronounced “sheik zoats.” In the Mayan language, it translates into “bat wing” which this group of passion flowers is commonly called due to the shape of the leaves which are also oddly succulent-brittle. The flowers, only 1 inch (2.5 cm) wide, are also unusual in the genus. While most species have colorful flower parts and reward their pollinators with nectar, this species has mildly colorful parts and no nectary. It has greenish outer flower parts and dark purple coronal filaments with yellow tips (the frilly, elongated appendages). Most remarkably, it has a shiny disk-like surface (known as the “limen”) in the center. The surface of it appears sticky and perhaps attractive to some animals looking for a tasty lick, but it is not sticky and no one knows who the pollinator is!

The species is known only from limestone areas of the Yucatan Peninsula, Guatemala, and Belize, precisely where the Maya culture is/was based. Our plant was collected nearly 20 years ago by Bruce Holst and Nancy Edmondson (former Horticulture Dir.) during a botanical inventory expedition to Belize. The species was named and described by John M. MacDougal of the Missouri Botanical Garden in its journal “Novon” in 1992. Selby Gardens currently has eight species of Passiflora in its collection. 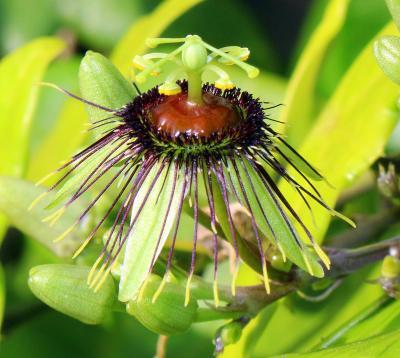 Growing in full sun, the leaves are relatively thick and stiff, but the plant produces copious flowers, though never fruit since the pollinator is not present in our area. 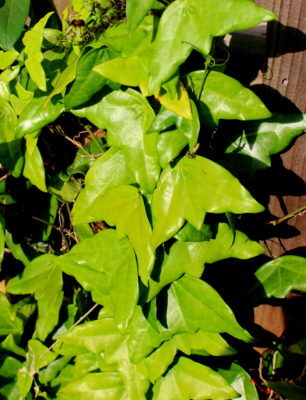 The “limen,” the shiny and smooth central portion of the flower is likely what attracts potential pollinators, but the true pollinator is not yet known to humans.