Salvador Dalí was well-known for his surreal paintings. His work often featured everyday objects portrayed with atypical or amorphous forms, his melted watches being one of the most iconic . He was fascinated by irregular shapes and could envision people or animals depicted in the abstract shapes of clouds and rocks. Mathematical patterns found in nature were another fascination for Dalí. This can be found in the spiral arrangements of plant parts such as leaves and flowers. Look for the plants in our living collection that you think might have intrigued Dalí, and imagine what he may have seen in their unusual forms.

FIG TREES All figs are in the genus Ficus, in the fig family, Moraceae. While this genus includes shrubs, vines, and epiphytes, it is best known for its trees. Selby Gardens has a number of large figs, many with writhing and undulating trunks, branches, and roots. Look for the strangler fig, Moreton Bay fig, and counsel fig.

BROMELIADS Found almost exclusively in the western hemisphere, this family is typified by having its leaves arranged in a spiral pattern, often forming a tight cone called a rosette. Many bromeliads grow epiphytically and benefit from this arrangement of leaves by allowing them to catch water and debris in their cups for later absorption.

SUCCULENTS A broad term for plants that store water in their leaves and stems, with cacti being the most well-known. The ability to store water in thickened stems is an adaptive response to desert-like conditions where they are found’ which also leads to swollen stems, sharp spines and thorns, leaflessness, and bizarre shapes and forms. Succulence is also found in some air plants, where a lack of reliable moisture has made water storage critical to survival.

SILK FLOSS TREE This showy Ceiba speciosa is a member of the mallow family, Malvaceae. Native to South America, it puts on an impressive display of large pink flowers in the autumn when the tree is deciduous. Found in regions with dry conditions for several months of the year, it stores water in its swollen trunk and protects that water from thirsty animals with a dense covering of large prickles. The common name of this Ceiba refers to the silky fibers attached to the seeds that catch the wind and aid in dispersal.

STAGHORN FERNS Named for the antlerlike pattern of the fertile fronds, these ferns grow as large epiphytes in old-world tropical forests. Their irregular shapes are unlike common terrestrial ferns, or any other plants for that matter. Their leaves occur in two forms (dimorphic), flat, forked fertile fronds that produce spores in brown patches on the back of their leaves, and clasping sterile leaves that form the body of the plant. 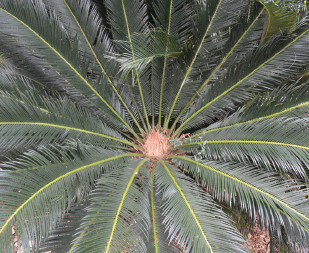 CYCADS Sometimes referred to as “living fossils,” cycads are a group of palm-like plants with an ancient lineage stretching back nearly 300 million years. Most have a rosette of stiff, plastic-like leaves, sometimes armed with small thorns for defense. Having evolved long before flowering plants emerged, cycads are conifers, more closely related to pine trees than palm trees. Within the curved arrangement of the scales on the large cones and the rosette pattern of the leaf arrangement, they boast repeated spiral patterns.