Editor’s Note: As part of an ongoing partnereship with the Conservation Foundation of the Gulf Coast, Selby Gardens’ Director of Botany Bruce Holst is assisting in a yearlong plant survey of a 230-acre property on Pine Island, Fla. known as Pine Island Preserve at Matlacha Pass, about 82 miles south of Sarasota The survey encompasses three visits to assess the differing seasonal flora. In April 2017, the first visit took place. Following is a summary of highlights of the 48-hour journey into the preserve. 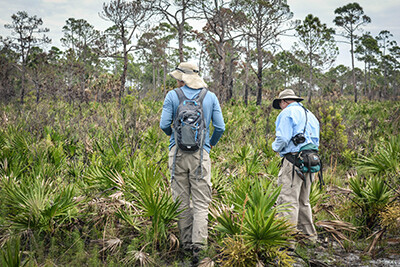 Armed with a GPS plotter, plastic bags, camera, magnifying glasses, snacks, bottles of water, and a hefty Guide to Vascular Plants of Florida, (Second Edition), Lee Amos of the Conservation Foundation, along with Selby Gardens’ botany team of Bruce Holst, Liz Gandy and Shawn McCourt, were well equipped for a 48-hour, primitive tour of one of Florida’s largest barrier islands.

Located in Lee County north of Captiva Island, Pine Island is relatively undeveloped. It doesn’t have a beach and its history is more agricultural than resort tourism. Sportfishing and tours of historic shell middens left by the Calusa are the main draws. With the 2009 acquisition of 230 acres on the island, the Foundation’s plan is to open Pine Island Preserve at Matlacha Pass to the public, free of charge, 365 days a year, introducing many more people to natural Florida. This park and nature preserve will serve as a trail head for Lee County’s 190-acre Pine Island Flatwoods Preserve, the Great Calusa Blueway, and provide public water access to Matlacha Pass National Wildlife Refuge, Charlotte Harbor Preserve State Park, and Matlacha Pass Aquatic Preserve.

But first, scientists need to know what plants (native and invasive) call the land home so the site can be properly preserved and in some cases restored. 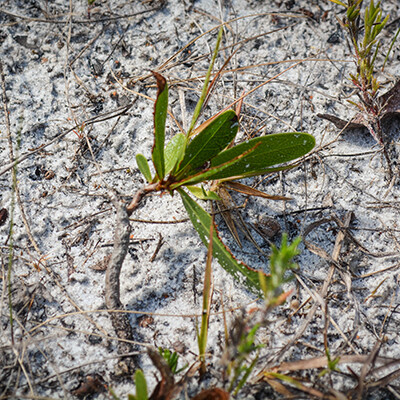 Beyond the pasture sits a wonderfully varied parcel of land that extends to Matalacha Pass. Holst led the survey, focused on identifying native species, but also noting invasive plants (and removing them, when possible). Early highlights were examples of the tiny, rare Deeringothamnus rugelii var. pulchellus. Commonly known as “beautiful pawpaw” (photo at right), it’s an endangered endemic plant found only in three Florida counties and nowhere else in the world. Like larger pawpaws, it also grows a fruit, but it’s much smaller. Plants grow no taller than 12 inches, and most are just a few inches tall. Given their small size, low reproduction, and rarity, the plants face a tremendous threat from development, poor management, and illegal collecting. Tillandsia bromeliads were also found in abundance, with no less than eight species found.

During the first two-day trip the team also encountered some of the animals of the pine flatwoods like gopher tortoises, eastern indigo snakes and many birds. The team will perform two more rounds of inventory in August and November to observe plants in different stages of flowering, and will then work to compile a comprehensive list of species on the Preserve.

The preserve is expected to open some time in 2018 and will have access to other nearby conserved lands, including thousands of miles of the Florida Circumnavigational Saltwater Paddling Trail.